Ramps. A strange name for a plant.

It’s a pretty spring wildflower, with flat green leaves. I’ve seen them sprouting in earliest spring, popping out of the dried leaves on the forest floor along with trout lilies, anemones, and hepatica. Wild leeks is another name for them. Odd to think of the pretty spring flower as a vegetable.

There were baskets of them for sale at the Greenmarket in Union Square, New York City. 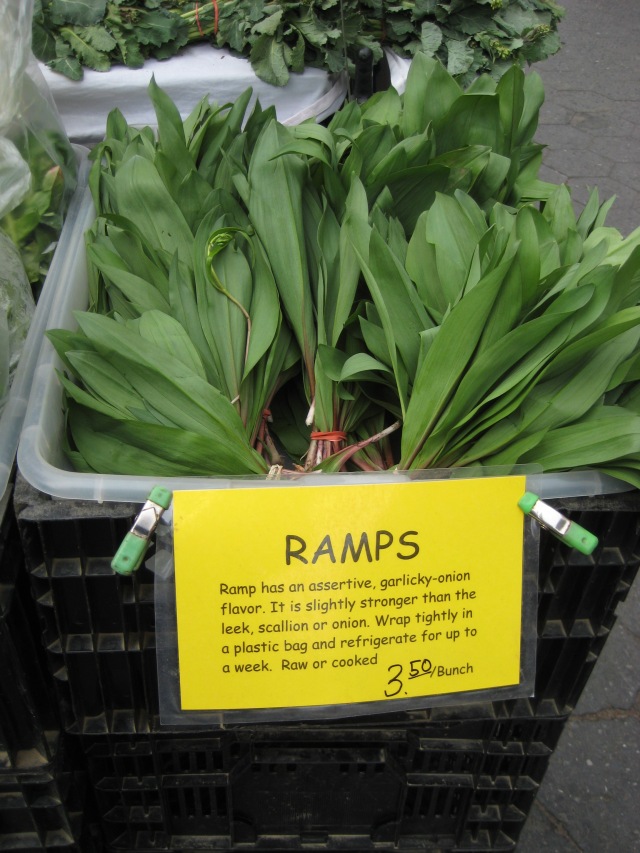 Folklorists note: Some websites will tell you that these are the plants in the fairy tale about Rapunzel–remember, Rapunzel’s mother craved the ramps (also called rampion, or rapunzel) growing in her neighbor’s garden, and her husband finally stole some for her. Unfortunately the neighbor turned out to be an evil witch and demanded their baby in return for the stolen plants. But sadly for folklore, the ramps that grow in American woodlands are a native plant (Allium tricoccum) not the same as the European ramp (Campanula rapunculus). Too bad, it’s a great story. 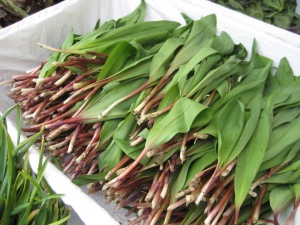 Anyway. American ramps are a tasty spring treat, and it’s great to see people buying local and enjoying a taste of the wild. 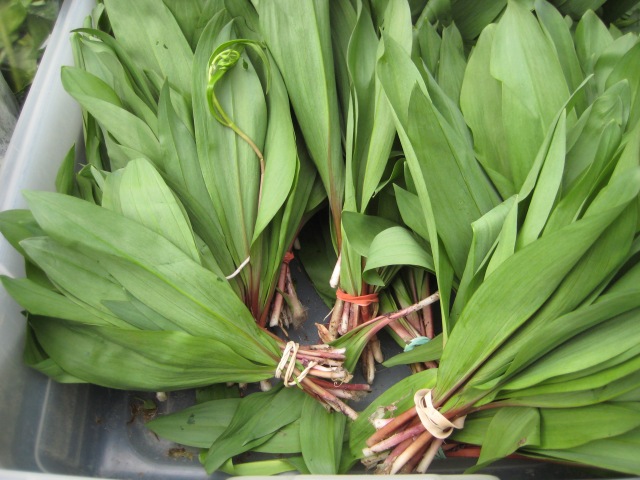 It’s a taste best enjoyed in moderation, though–a few ramps tossed in an occasional springtime salad are fine, but some states have huge ramp festivals, and ramp populations are not on the increase.

The best kind of vegetable: local and organic! 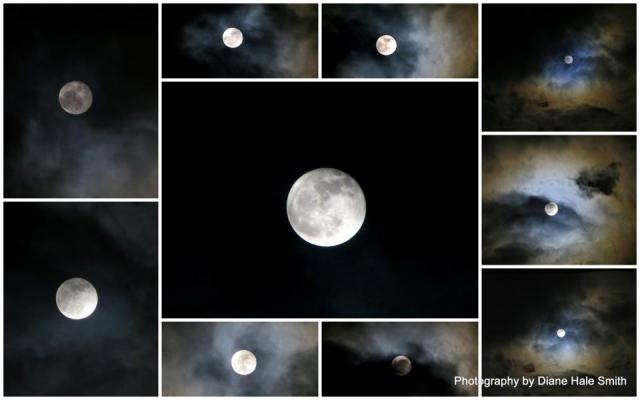 Thanks to Diane Hale Smith for this beautiful moon collage. It was taken last month, when the moon and the clouds were playing hide and seek all night.

Cinnamon Fern. Osmundastrum cinnamomeum. (At least that’s the Latin name as of the moment, they seem to keep on changing names and reclassifying plants more often than I change my socks.)

Many thanks to Frank Knight for this lovely photo–what a nice birthday present!

Delicious as it looks, the brown stuff isn’t really cinnamon, of course. In fern-speak, the fuzzy brown stalks are called fertile fronds–leaves whose function is to help the plant reproduce. The fertile fronds grow sori, which are containers for dust-like brown spores. The green leaves are called sterile fronds–no spores, but they do that usual green-leaf thing of making food for the plant.

Ferns are just starting to sprout now, so this is a look ahead to what Thoreau called “the plumes of summer.”

Stand up for the Earth!

“Green” isn’t very much in the news these days, and other–very worthy–causes grab more headlines. But stay green. Even if you’re the lonely voice in the crowd, keep on telling people–we need to care for our planet. 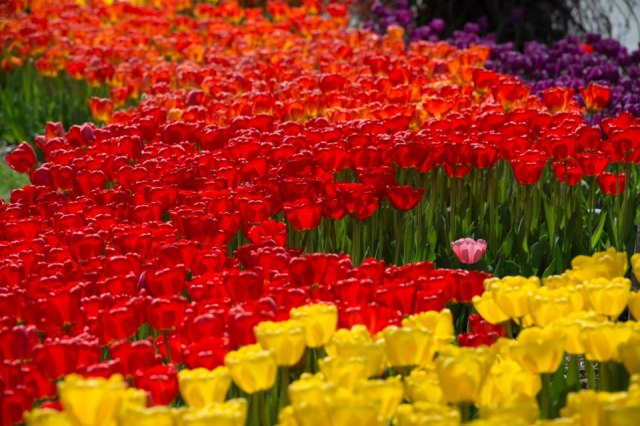 Thanks to Wells Horton for this wonderful photo.  http://wells-horton.smugmug.com/ 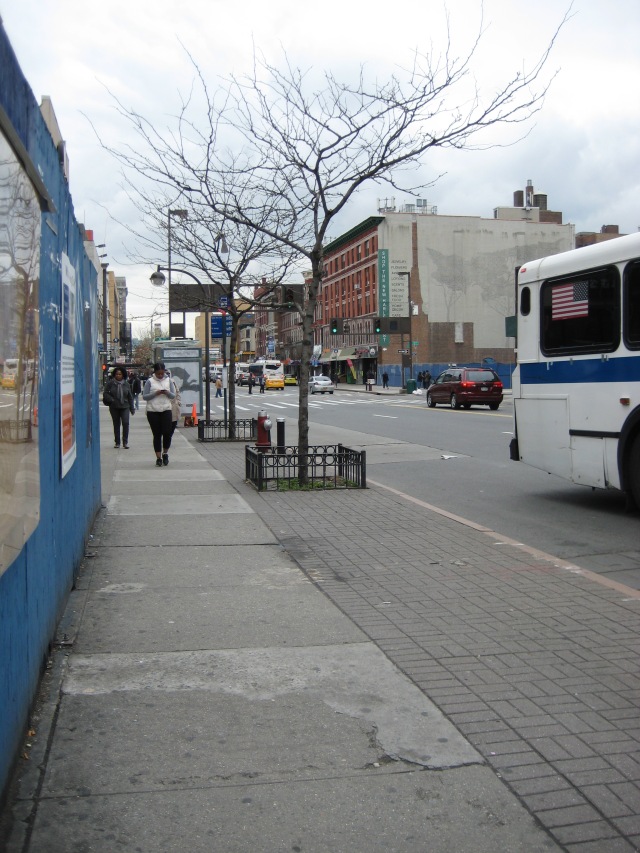 A walk down 125th Street in Harlem, New York City, on a cold spring afternoon.

Cement, blacktop, cars. Bare branches. Not much green. Nothing in bloom.

But a closer look revealed a spark of color. This was my first sighting for the year of my favorite botanical sight: the yellow petals of a dandelion. 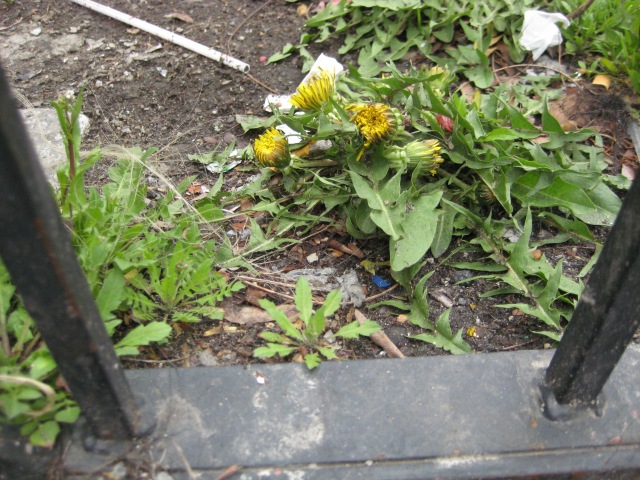 One of the countless reasons I love dandelions is that they can make themselves at home anywhere. Anywhere on Earth, it seems. They grow on every continent except Antarctica (and I’m sure they’ll be blooming there before long.) They grow on mountaintops, in sand dunes, along riverbanks, and seem to vie with each other to choose the least hospitable environments: driveway gravel, sidewalk cracks, blacktop, highway roadsides.

It’s not that dandelions prefer poor soil. If you plant a dandelion seed in rich black compost, and then weed out the competing plants and throw in some fertilizer, you’d better stand back. A dandelion grows with amazing rapidity, and can sprout a waist-high blossom with a long neck like a giraffe, and a three-inch flower head on a thick stalk. No,
dandelions don’t mind at all when life is a bed of roses. But when life hands
the dandelion a challenge, the dandelion rolls up its sleeves (metaphorically
speaking) and gives it a try.

Here’s an intrepid dandelion poking up from under the sidewalk on another streetcorner.

Only this corner is on the other side of the globe–it’s in the city of Nuwara Eliya in Sri Lanka. Dandelions are sort of like McDonalds–you can find them on a streetcorner just about anywhere you go.

This is the most bustling, enticing, delicious farmer’s market I’ve ever been to. Local spring greens, potatoes, herbs, leeks. Muffins, honey, goat cheese, maple syrup. And flowers, flowers, flowers, flowers. The famous Greenmarket in Union Square. Funny, I had to go to New York City to find flowers blooming.

It was a refined form of torture for me to have to walk past dozens of stalls selling plants of every description, and not be able to buy any. But the daffodils and the pansies wouldn’t survive being stuffed in a backpack and carted around the city. And it’s not like there aren’t a few plant stores where I live, upstate. But still…

So I had to settle for virtual images instead of the real thing. 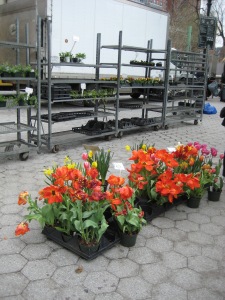 A clump of parrot tulips in a corner caught my eye–rather bedraggled, but I have a thing for parrot tulips and their huge feathery-edged petals. My grandfather used to grow them in his garden.

And when I got up close to them and looked them right in the eye, so to speak, I understood why the old Dutch artists were so enthralled by images of parrot tulips. They’re the Marilyn Monroes of the plant world–no matter how dishevelled or windblown, you just can’t take a bad picture of them.

The thing that really hits you in the eye is the bull’s-eye in the center–the velvet black surrounded by lemon yellow in the center of the red. 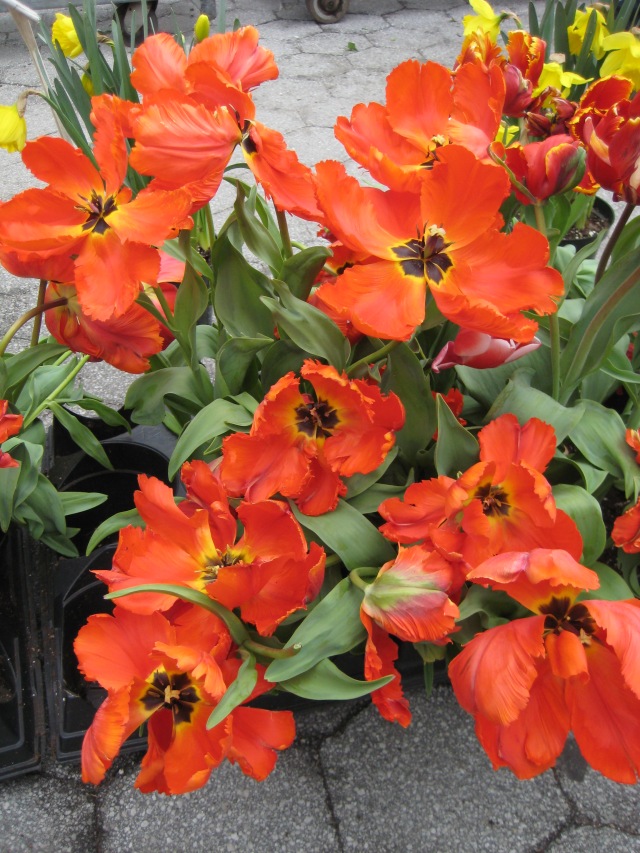 You’d think it would be perfect for luring in pollinators, but actually it’s false advertising. Tulips don’t bother much with sex anymore.

Tulips don’t need insect pollinators. Lovingly tended by their willing human servants, tulips rarely create viable seeds–the ability to sexually reproduce has been all but bred out of them by generations of horticulturists who want every flower they sell to be an exact duplicate of the parent. After all, horticulturists are creating a piece of merchandise that must turn out exactly the way it’s represented in the garden catalog. 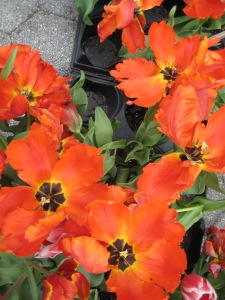 Tulips started out as wildflowers, but have been shaped and cultivated by humans since the Middle Ages or before. In ancient Persia, it was a tradition that giving red tulips was an expression of love–the black in the center represents the lover’s heart burned to a coal by fiery passion. 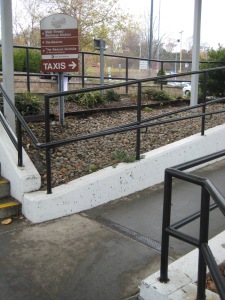 Last December, I was at the Beacon train station, and I noticed a really magnificent specimen of a thistle. It was growing, still green in December, thriving among the gravel so carefully placed to keep weeds down (see Thistle: Waiting for the Train).

Well, today I happened to be at the Beacon train station again, waiting for the New York City train, and there was my prickly friend. The thistle has weathered the winter, better than I did–no colds, flu or dry skin–and is in fine shape. No more just a flat basal rosette of leaves–now it’s time to spring into action.

Here’s the thistle in early December:

And here’s the same plant more than four months later: 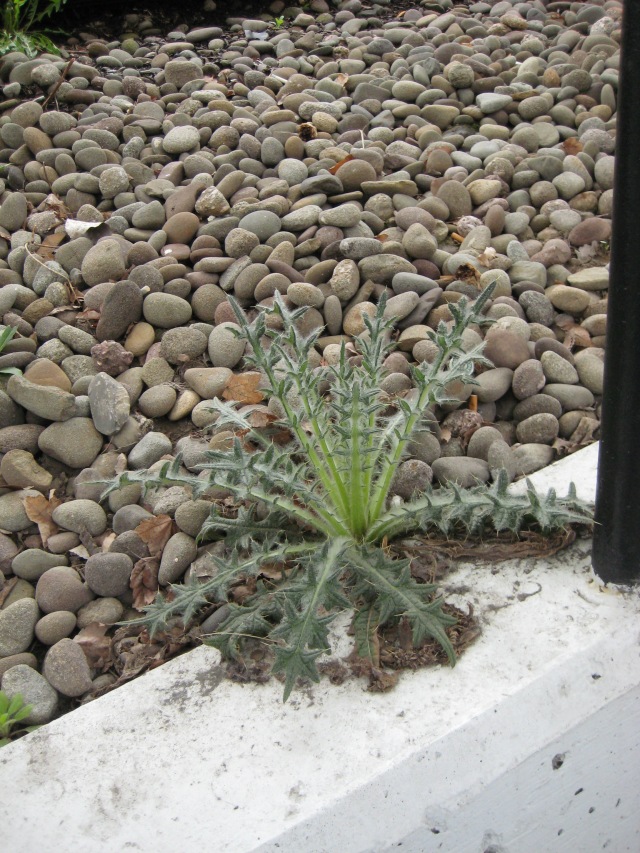 Strong green shoots are thrusting up from the center. Being green and photosynthesizing all winter gives thistles a tremendous head start. In this chilly spring, most plants are still underground, timidly beginning to consider the possibility of germinating. The thistle has already started its journey to summer.

Okay, this is sort of cheating for a blog that’s supposed to be about nature, but I’m an absolute sucker for quilts.

Real old-time, traditional quilts like these ones, I mean, made from honest-to-god scraps.

I once met an elderly quilter, who wanted to bang her head against the wall at the very idea of buying brand new fabric and then cutting it up into little tiny pieces and sewing it all back together again…Of course, I do it myself, but it does seem absurd when you think about it.

Anyway, the Quilt Bug in Esperance, New York, is a great little shop with gorgeous fabric, for those of us who don’t mind creating our own scraps.

These quilts caught my eye like a stop sign, on a drab day when nothing was in bloom. I’m attracted to quilts like bees are to blossoms, possibly for some of same reasons. Bees and other pollinators fly along, looking for something out of the ordinary. They investigate the unusual–the sudden gleam of vivid color against the brown grass. The symmetrical patterns of petals against the random placement of leaves.

Bright color and symmetry are two of the clues Nature uses to say “Over here! Something worth checking out!” I was once buzzed by a hungry hummingbird who was firmly convinced my flowered shirt was edible.

These antique quilts will have to satisfy my thirst for color until the flowers come.

The real flowers are on their way, though–notice the dandelion leaves sneaking out from under the curb? 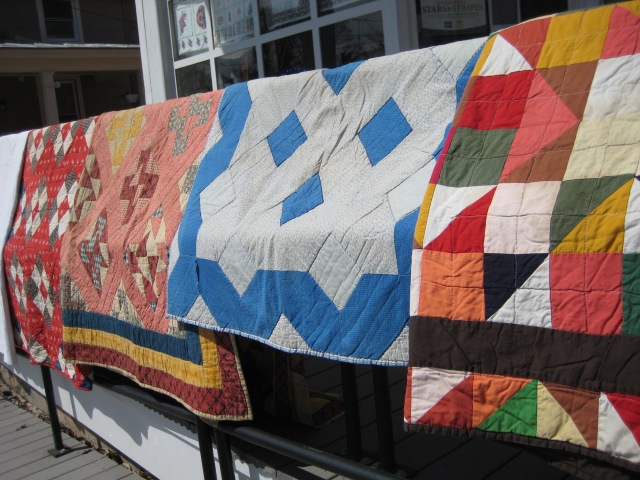 Yew: Life and Death at the Mall

Sears department store is better known for tractors and washing machines than for floral arrangements. The landscaping around the Sears in Colonie Center Mall, Colonie, NY, is pretty sparse.

Actually, once you get up close to these plump round balls of bushes, the foliage is quite nice–soft and green. This is Yew. Planted in almost every American shopping mall and housing development.

It’s also planted on zillion-dollar estates and world-famous historic sites, like Windsor Castle and Versailles. Because yew is an obedient plant. You can shape it into almost any shape you want–it’s like botanical Silly Putty. It can tolerate “extreme pruning”–doesn’t object to being trimmed by a hedgeclipper into the most outlandish shapes–a dragon, a giraffe, a castle, or a softball.

There’s a bewildering variety of yews, both trees and shrubs: English yew, Mexican yew, Himalayan yew, Japanese yew. The fat green shrubs planted for landscaping are usually crosses between English and Japanese. All the yews are tough and hardy; slow growers, but also quite long-lived. An English yew tree can live up to 2,000 years.

Yes. Two. Thousand. Years. This row of bushes may still be standing when Sears has crumbled into dust.

On the other hand, they’re poisonous. All parts of all yews, except the outer flesh of the berries, are quite exceptionally toxic. There’s more than a few records of Ancient Britons using yews to commit suicide rather than surrender to the invading Romans. Seems a little odd yews are found in schoolyards and housing developments all over the place–there were dozens of them where I grew up. (Given my propensity for eating wild plants as a child, it’s quite remarkable that I survived, really.)

On the third hand, the oil found in yews, taxol, has been used as a cancer medication in many cultures for centuries. Even today it’s a powerful cancer-fighting drug.